ELKO MeetUP 2018: Technologies are not enough – the role of the human is becoming more and more important. 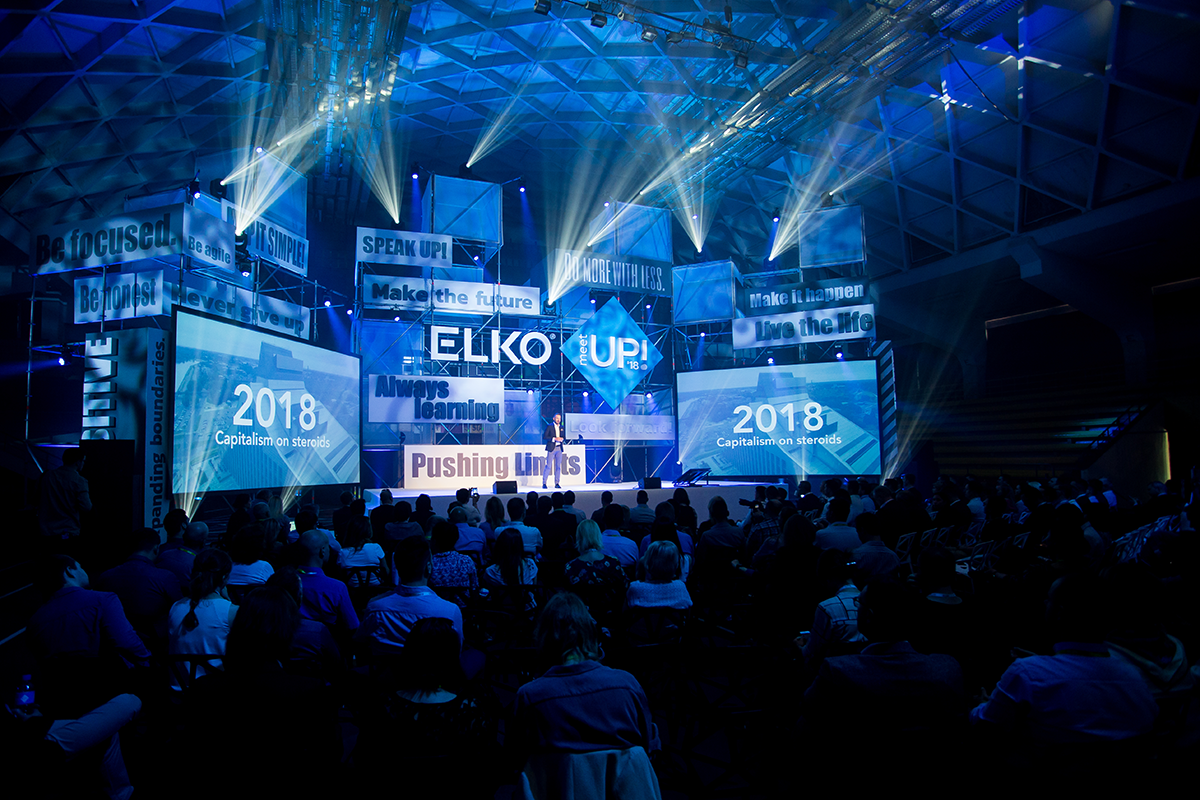 Humans and their characteristics play a key role in the technological area in the trade of IT products and solutions. Technological progress creates a new environment, where human qualities are becoming more and more important, and it is crucial to find a balance for this situation. This was the final conclusion of the IT Industry Partner and Technology Conference “ELKO MeetUP”, which brought together 600 of the largest cooperation partners and clients, as well as representatives of manufacturers, from across the globe.
In addition to the topics related to blockchains, the distribution industry, development of the technology sector, artificial intelligence and digital solutions, all speakers at the conference stressed the importance of human relations and qualities. Attention was also paid to the topics related to emotional intelligence, definition and achievement of goals, critical thinking, and requirements set by Millennials in the working environment. One must learn to use technologies in unique ways to obtain competitive advantages, however, it must be remembered that technological progress has created a new world, while the human in it is basically the same. During this time, a human is expected to deliver new skills – the ability to adjust to speed, and to develop qualities such as critical thinking and emotional intelligence.

The digital aspect and the involvement of humans play equally important roles in the development and strengthening of industrial eco-systems, and a balance must be found between both of those aspects. Svens Dinsdorfs, CEO of ELKO, stressed at the opening of the conference: “Technologies are intended for the improvement of efficiency, but they must be used logically. There are certain things, which may not be automated, for example, a tangible affinity with a client. Meanwhile, humanity is the key, when there is need to distinguish among the competitors.” Important data, up-to-date technologies and ideas are not worthwhile, if there is no human involvement, with the ability to share their knowledge and develop new solutions.

The digital aspect and the involvement of humans play equally important roles in the development and strengthening of industrial eco-systems, and a balance must be found between both of those aspects.

It is important to create a culture of innovation inside the company first, to give employees the opportunity to think and act as entrepreneurs – this will enable faster growth also for the business. At the moment, society is orientated towards getting a result, but sometimes the process, which actually gives the greatest satisfaction, is forgotten, stressed Zuarguss, Head of the Intellectual Development Foundation of Latvia. Whereas, achievement of goals is significantly affected by the fact that currently humans are being oversaturated with information, and, upon commencement of work with complicated tasks, it is easy to give in to the process of procrastination, addressing less important tasks. For a faster and more successful achievement of goals, concentration on just one task, writing down of goals and looking for internal motivation is especially important, Andrejs Gavrilovs, ELKO Baltic Sales Director, pointed out at the conference.

The large volume of data was outlined as one of the greatest challenges at the moment. The phrase “analysis paralysis” characterizes the situation, when so much data has been obtained, the company or employee is not able to distinguish the valuable information from the rest of the background data, said Edgars Lapiņš, Marketing Director of Accenture Latvija. This significantly affects the company’s ability to adopt considered decisions. As mentioned by Phil Rowley, Director of Innovations at “PHD Global Business”, despite the unmeasurable amount of data gigabytes available on the internet, approximately a mere 0.5% of all the available data is used.

Discussing the tendencies in the distribution sector, it is expected that the greatest progress this year will definitely be observed in the areas of clouding, security, internet and data centres, Peter Van Den Berg, European Regional Director of "Global Technology Distribution Council" stressed at the conference. However, this progress is not possible without the involvement of humans, pointed out Van Den Berg: “Humans are the most important to be invested in – their knowledge is significantly necessary for the distribution sector.”

ELKO is one of the largest distributors of IT products and services in the European and Central Asia region. Over the years, by increasing volume and efficiency, the company has grown from four people to become the leader of not only Latvia, but the entire region employing more than 700 employees. At the moment, ELKO represents 210 manufacturers, 80 of which have joined during the last two years.
Gallery
Other news
26 Mar ELKO to distribute Anker in the Nordics 23 Mar POCO Launches Two Flagship Phones "The Real Beast" POCO F3 and POCO X3 Pro 17 Mar Introducing the new 11th Gen Intel® Core™ desktop processors